The sharp increase in opioid use related harms highlights how little is known about opioid use disorder recovery. This study examined data from a nationally representative sample of U.S. adults who once had an opioid problem to document patterns of recovery from opioid misuse, as well as factors related to early (<1 year) and mid-recovery (1-5 years) status. Findings help inform policy, prevention, and practice recommendations.

The rising incidence of opioid misuse in recent decades has resulted in an unprecedented increase in opioid use disorder, opioid use-related injury, and economic burden. In addition, rates of opioid overdose death have increased from below 10,000 in 1999 to  47,600 in 2017 and 46,802 in 2018. Efforts to understand, prevent, and reduce the rising incidence of opioid use at the population level (e.g., reducing overdose within states and counties) over the past few years have been promising, yet remarkably little is known about factors associated with recovery of opioid misuse at the individual level which, if known, could improve policies, treatment, and recovery support services.

In this large-scale and nationally-representative survey of U.S. adults who resolved a significant substance use problem, the authors examine the prevalence of early recovery (<1 year since problem resolution), and mid-recovery (1-5 years since problem resolution) status, and provide a first look at the characteristics of individuals who have achieved early vs. mid-recovery from opioids and compare this group to those achieving recovery from alcohol use problems. The authors also provide insight into effective patterns of service utilization, as well as implications for policy, outreach, and intervention to promote long-term recovery.

This study was a secondary analysis of a nationally representative survey of U.S. adults who resolved a significant substance use problem, called the National Recovery Study. In the current analysis, authors focused specifically on participants who identified opioids as their primary substance and compared these individuals to those who identified alcohol as their primary substance on demographic characteristics, substance use history, service utilization, and markers of psychosocial wellbeing. Individuals were randomly selected from 97% of listed households in the U.S. and benchmarked using demographics in proportion to the known U.S. population.

Of the 39,809 individuals contacted, 25,229 (63.4%) completed the eligibility screening item. The final sample used in the current analysis included 2,002 respondents who answered “yes” to “Did you used to have a problem with drugs or alcohol, but no longer do?” The researchers then used procedures to assign differential “weights” to participants to ensure proportional representation among the study sample relative to the known U.S. population (i.e.,  to accurately reflect proportions of individuals across sex, age, race/ethnicity, geography, education, income, metropolitan area, and home ownership). Gathering data in this way, coupled with the authors’ use of demographic weighting strategies, allowed them to provide population-based estimates of the rate of resolving a primary opioid vs. alcohol problem, and information about the characteristics of individuals who have achieved recovery nationwide.

Study authors provided population-based estimates of the prevalence of recovery from opioid and alcohol misuse in the U.S. population, by measuring substances participants used more than 10 times in their lifetime, which of these substances were ever a “problem” for them, which of these “problem” substances was their primary “substance of choice.” Participants also answered questions about their history of participating in formal treatment (e.g., detoxification, residential or outpatient treatment), mutual-help groups (e.g., Alcoholics Anonymous [AA], Narcotics Anonymous [NA]), recovery support services (e.g., sober living housing), and use of medications approved for opioid use disorder (e.g., acamprosate, disulfiram, naltrexone). Lastly, participants answered questions about overall psychological distress, happiness, and self-esteem.

A total of 5% reported opioids and 51% reported alcohol as their primary substance, corresponding to population estimates of nearly 1.2 million and 11.4 million in the U.S. who have resolved opioid and alcohol use problems, respectively.

Individuals with primary opioid use also used for an average of 8.4 years before resolving their problem, compared to 21.9 years among those reporting primary alcohol use.

Individuals in mid-recovery from opioids were more likely to report use of medication to treat substance use disorder (e.g., buprenorphine) and attended more Narcotics Anonymous (NA) meetings. 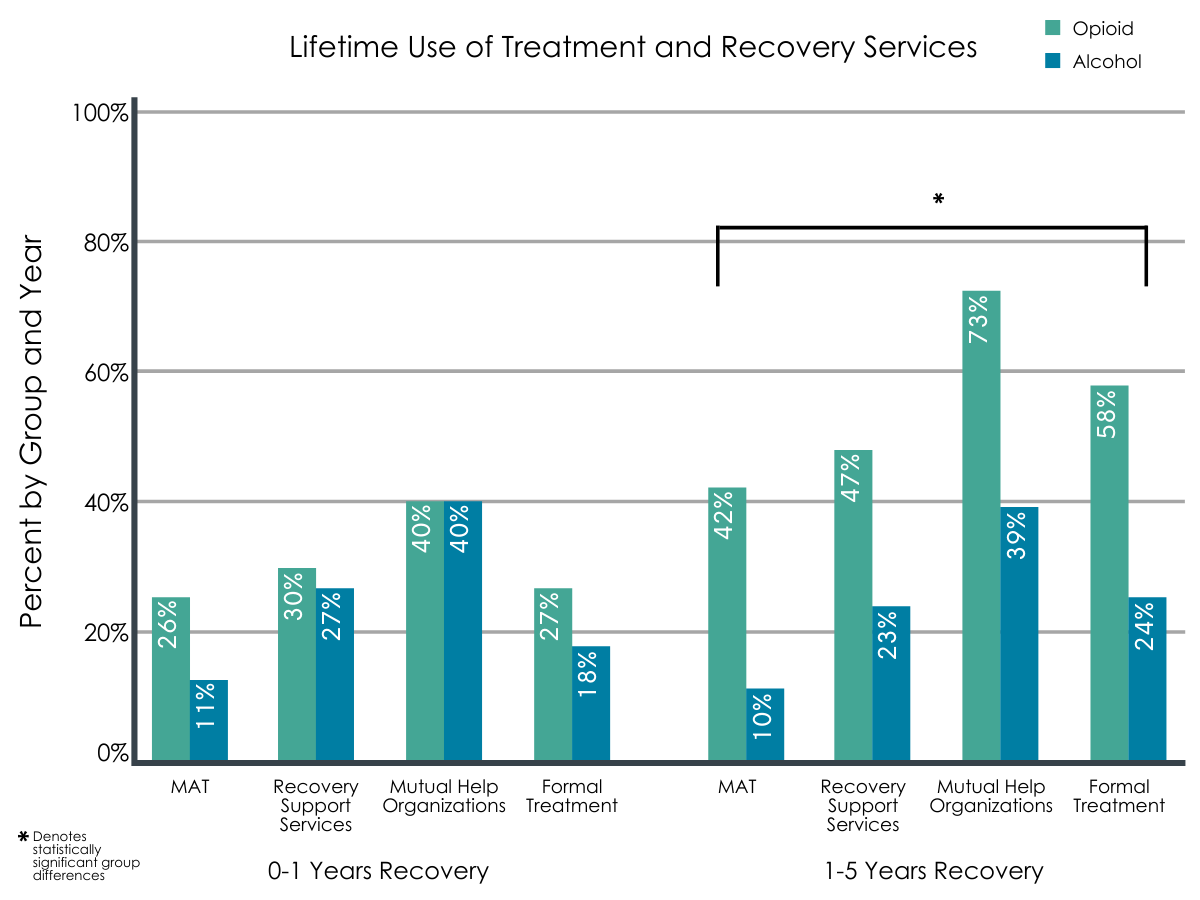 Lastly, self-esteem scores were higher among individuals in early recovery from opioids compared to those in early recovery from alcohol, but the opposite was true for individuals in mid-recovery (Figure 2). Opioid and alcohol primary participants in both early and mid-recovery had similar levels of other psychological and social well-being (e.g., current psychiatric symptoms). This study provides the first known estimates of opioid and alcohol use recovery, as well as information into key demographic and service utilization variables associated with recovery. Nearly 1.2% (estimated 259,260) and 2.2% (estimated 489,465) of primary opioid users achieved recovery for up to a year or 1-5 years, respectively. Though encouraging, these results should be interpreted in light of estimates that 10.6 million in the U.S. report past-year opioid misuse, nearly 2 million have opioid use disorder, and persistently high rates of opioid overdose and death. This disparity highlights existing service gaps with respect to the ongoing opioid epidemic, as well as the potential good that would likely result from dissemination of policy, outreach, and prevention and intervention improvements.

Although the proportions of individuals in recovery were higher for individuals with primary alcohol use (estimated 1.6 million in early recovery, 2.6 million in mid-recovery), it should be noted that the public health, personal, and economic costs of alcohol continue to outweigh those of opioids and, therefore, also require ongoing attention in terms of policy, research, and intervention.

Compared to individuals in early alcohol recovery, those in early recovery from opioids were younger, more likely to be White, reported more extensive substance use in the past, and began using opioids at an older age. Similarly, among those in mid-recovery, individuals with primary opioid use reported use of more substances previously and began using their primary drug (opioids) later in life. In both recovery groups, individuals reporting primary opioid use used for an average of 8-9 vs. 22-23 years for primary alcohol users. By considering the unique needs of individuals in, or seeking, opioid use disorder recovery, treatment providers and policy makers may help address their greater complexity and psychosocial needs.

Treatment service and mutual-help utilization rates were similar among opioid and alcohol groups in early recovery. However, rates of treatment utilization, service use (e.g., sober living housing), mutual-help group attendance, and medication use were significantly higher among primary opioid users compared to primary alcohol users in mid-recovery. This may signify need for greater breadth, intensity and/or duration of treatment for opioid users, as well as ongoing use of medications to manage symptoms and cravings, to achieve recovery past 1 year. This may be due in part to prior findings which show those with primary opioid problems have substantially lower recovery resources (“recovery capital”) and much lower quality of life and functioning in the early years of recovery compared to individuals with other alcohol or drug use problems. As such those with primary opioid problems may need ongoing and more intensive support for longer periods than other groups. 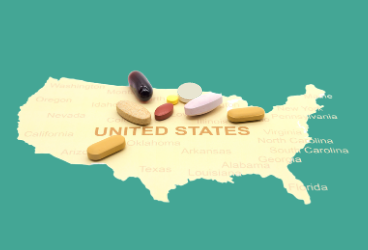