As policies on the production and sale of cannabis become more liberalized across the United States and internationally, increasing numbers of individuals have begun to consume it. Given that cannabis exposure can result in a cannabis use disorder for some, more people are likely to develop cannabis use disorders and, in fact, rates of such disorders have increased in the population. Currently, there are no proven pharmacotherapies to treat cannabis use disorder. A question has lingered, however, as to whether certain cannabis plant derivatives – notably cannabidiol (more commonly known as CBD) – often publicized as a treatment for a wide variety of medical conditions, could be effective in treating cannabis use disorder. This rigorous clinical trial addressed this question.

This study used a randomized clinical trial design with 84 participants who received one of three different CBD medication doses or a placebo twice daily for four weeks and were assessed for cannabis use using both biological and self-report measures weekly – urinary tetrahydrocannabinol (THC) levels and number of days per week abstinent from cannabis.

This was a phase 2a clinical trial, meaning that a small sample size was used to determine the most efficacious dose of CBD for treating cannabis use disorder, which may inform a larger clinical trial that tests the best dose determined by this initial trial. The researchers used a design technique to increase the efficiency of the study (called an adaptive Bayesian trial). That is, 48 participants were initially randomized to receive 200mg of CBD (n=12), 400mg of CBD (n=12), 800mg of CBD (n=12), or placebo (n=12) for four weeks. Interim analysis showed 200mg of CBD to not be an efficacious result, so the second stage of the trial randomized 34 different participants to 400mg of CBD (n=12), 800mg of CBD (n=11), and placebo (n=11) for four weeks. Study participants from both stages were added to the final analysis with the exception of the group that received 200mg of CBD. Notably, all groups including the placebo also received 30 minutes of motivational interviewing targeting cannabis use change from a psychologist at the screening visit, baseline visit, and weekly visits during the study period (six times over a four-week period).

This study was done in London, United Kingdom and participants were recruited through websites, forums, and flyers in the local community. The first stage was done between 2014-2015 and the second stage was done between 2016-2017. Inclusion criteria to be a part of the study included: aged 16-60 years old, met Diagnostic Statistical Manual (DSM-5) criteria for cannabis use disorder of at least moderate severity, expressed a desire to stop using cannabis and intended to do so in the next month, reported at least one previous unsuccessful attempt to quit cannabis, reported co-administering cannabis and tobacco together (common in Europe), and provided a positive urine sample for THC. Some of the exclusion criteria included: currently pregnant or breastfeeding, currently using a psychotropic drug to treat a mental illness, and the use of other illicit drugs more than twice per month at screening. The study used a synthetic, pharmaceutical-grade form of CBD of 99.9% purity that was delivered in a capsule.

In order to ensure adherence to the treatment plan, study participants were sent text messages to remind them to take their medication two times a day, spaced 12 hours apart. If participants were not adherent to the treatment protocol, determined by more than 30% of self-reported doses missed per week, returning more than 30% of medication capsules per week, beginning psychotropic medication during the study period, or not attending a site visit within two days of the scheduled appointment, they were not provided with additional medication for the duration of the trial but still received motivational interviewing. Overall, 77 or the 82 participants, or 94.2%, adhered to the treatment protocol and completed treatment.

This clinical trial’s data were analyzed using an “intention-to-treat” approach, meaning that even if participants dropped out of the study or were determined to not adhere to the treatment protocol, they were still analyzed as part of the group to which they were initially randomly assigned.

A complex statistical technique was used after the first and second stage of the adaptive Bayesian trial to determine the most efficacious dose of CBD compared with the placebo. The treatment effect of CBD was determined by comparing the change in baselines of the primary outcome measures, urinary THC levels (specifically a urinary THC-COOH:creatinine ratio) and self-reported days of cannabis abstinence per week, of the 400mg and 800mg CBD groups to the placebo group.

The 400mg and 800mg dose of CBD, but not 200 mg, outperformed placebo in reducing cannabis use over the study period. The 400mg and 800mg dose of CBD were generally well-tolerated by study participants.

The CBD treatment appeared to have an effect on cigarette smoking, sleep quality, and both cannabis withdrawal and anxiety symptoms.

In a group of 82 patients with moderate to severe cannabis use, daily doses of 400mg and 800mg of CBD over a four-week period were found to result in a small but significant reduction in cannabis use compared to placebo, although once the medication was discontinued, this reduction was only sustained by the group taking 400mg of CBD at final follow-up 24 weeks later.

Although this study established that CBD is generally safe in the treatment of cannabis use disorder, more research is needed to draw conclusions about its effectiveness. In addition to the treatment effect being small during the four-week trial, only the group taking the 400mg dose had sustained a reduction in cannabis use at the final follow-up. Moreover, even though the severity of cannabis use disorder in the different groups was similar as measured by DSM-V symptoms, the baseline measures for the group taking the 400mg dose of CBD had much higher urinary THC levels and reported less days abstinent from cannabis per week compared with placebo. Therefore, there is larger room for improvement in the group taking 400mg of CBD which can lead to a regression to the mean, sometimes a problem in small sample sizes where randomization does not even out pre-existing individual differences in each treatment group. If future trials with larger sample sizes do explore the use of CBD to treat cannabis use disorder, this study established that the likely efficacious dose is between 400mg and 800mg. Importantly, the study used a synthetic, pharmaceutical-grade form of CBD rather than a plant extract and the daily doses of CBD used (200-800mg) are much larger than the concentrations typically found in unregulated over-the-counter CBD products (25-50mg).

The placebo group also improved over the four-week treatment period. The placebo group went from having a little more than one day of abstinence per week at baseline to around four days of abstinence per week at the end of the treatment period, and urinary THC levels also decreased. All groups in this clinical trial received six sessions of motivational interviewing, an evidence-based intervention for cannabis use disorder. This behavioral intervention appears to have been effective in reducing cannabis use and may have had more of an impact than the CBD, though we cannot be sure due to the likely clinical effect of the placebo medication.

There were some interesting findings of the effect of CBD on some of the secondary outcomes in this study. The 400mg dose appeared to decrease the number of cigarettes smoked by participants during the treatment period and at the final follow-up. This finding may warrant further investigation given the increased tobacco-related mortality in those with substance use disorders. The 800mg dose appeared to moderately alleviate cannabis withdrawal symptoms and anxiety symptoms during the treatment period and at final follow-up, opening up the possibility that CBD could be used to treat symptoms in those seeking treatment for cannabis use disorder that may improve retention in treatment and other treatment outcomes.

Although this study showed that CBD doses ranging from 400mg to 800mg have the potential to reduce cannabis use in those with moderate or severe cannabis use disorder, taking into account the marginal effect size, the small sample size, and other limitations of the study (see limitations section below), these study results should be interpreted with caution and more research is needed before making a clinical recommendation of using CBD to treat cannabis use disorder.

In a group of 82 patients with moderate to severe cannabis use disorder, daily doses of 400mg and 800mg of CBD over a four-week period were found to result in a small but significant reduction in cannabis use compared to placebo when combined with six sessions of behavioral intervention, although this reduction was only sustained by the group taking 400mg of CBD at final follow-up 24 weeks later. The jury is still out in determining if CBD is an effective medication for treating cannabis use disorder. However, there are effective treatment modalities to treat cannabis use disorder, including motivational enhancement therapy, contingency management, and cognitive-behavioral therapy. 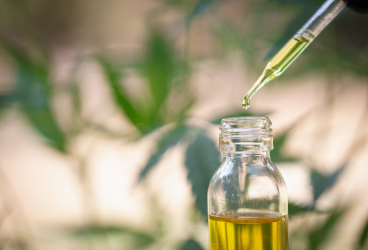